Hi! Thanks for agreeing to do the intereview. First off, how did you get involved with Dead Girls?

It was some time in November 2008 that Murky Depths editor-in-chief, Terry Martin, asked if I’d be interested in working on the graphic novel. I had just finished the 4th in a series of short comics for him and was quite surprised to hear that cult sci-fi novelist Richard Calder would actually want me to draw his Dead Girls graphic novel. I thought it was a great opportunity so I immediately jumped at it, starting with a few conceptual designs – the project then kicked off from there.

What were the challenges in illustrating the comic? Have you read the book?

I’ve yet to read the actual novel but I did get to go over the screenplay Mr. Calder had written – which he later adapted into a comic script. He pretty much described everything down to the smallest detail and also provided me with lots of reference images to help me work out the visuals so drawing the GN wasn’t as difficult as I thought it would be. 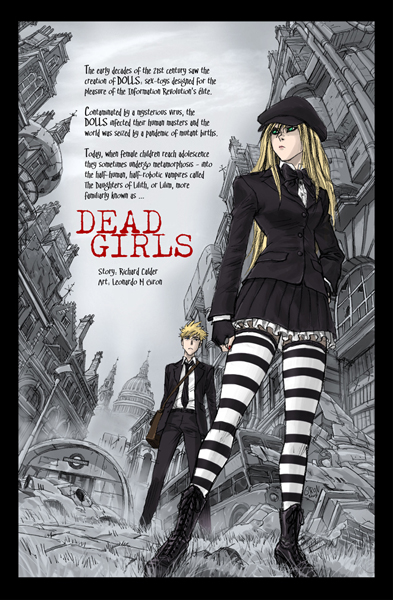 What qualities of Dead Girl do you think makes it suitable for the comic form?

Dead Girls has that strong comic book and anime influence about it – this is what I’ve noticed as I read the film script. That’s why I feel it made sense for it to be adapted into comic form.

What was it like working with Richard Calder? What’s the collaboration process like, since you’re based here in the Philippines?

Everything is being done via email and progressed at a smooth and steady pace. It’s quite a pleasant experience working with Mr. Calder – he openly allows me to do my own interpretations when it comes to camera angles, perspective, as well as other visual aspects. He first sends me the script for each episode. I then draw simple layout sketches which are then reviewed, making sure all is in place – changing elements whenever necessary. Once we are happy with the roughs I will then finalize the pages in black and white for the Murky Depths serialization and later in color for the graphic novel.

Moving on to more on the craft, when did you know that you wanted to become an artist?

I’ve been drawing for as long as I can remember. My father was the one that got me into drawing. He worked as a carpenter and I remember watching him as he scribbled his designs on paper whenever he was home. Later, as with every kid my age, I started drawing those giant robots on TV, filling up the back of my notebooks at school. It wasn’t ‘til high school that I took drawing seriously then after graduating, I took up a Fine Arts course majoring in Advertising to learn the basics.

What made you decide to foray into comics?

I was introduced to American comics back in college by my classmates who were into mutant superheroes popular at the time. I immediately got hooked when I saw the works of Filipino artists who have made it into the mainstream. I pondered at the possibility of becoming a comic book artist someday; but then I had to set that aside when I started working as a full-time textbook illustrator. This is where I learned almost everything I know about the trade and developed the skills with actual practice. I now apply this skill in my work in comics.

What materials do you use for your art? (i.e. do you hand-draw it then scan it into the computer, use Photoshop, etc.?)

I’ve used a variety of different techniques over the years but I still prefer drawing the old fashioned way with pencil on paper. I then scan the work on the computer to be tweaked with color and such. I still couldn’t get the hang of drawing directly on to the computer using a tablet – I guess I’m still a traditional type of guy.

Who are the artists that have influenced your art?

There are so many artists of different genres that I have drawn inspiration from but I do believe master Japanese manga artists have had the greatest influence on my work. Great mangakas like Katsuhiro Otomo, Yukito Kishiro, Hiroaki Samura and Masamune Shirow to name a few.

How did you first get involved with science fiction and fantasy?

I’ve always been a fan of sci-fi and fantasy – and was lucky enough to be featured in an issue of ImagineFX magazine. Richard James Johnson, the brilliant mind behind the novel The Enemy’s Son came across my work and asked if I could do conceptual designs for his Erth Chronicles website. This became the first of many more collaborations with him and my very first venture into sci-fi fantasy. Our collaborations progressed into short comic strips featured in Murky Depths – with many more in the works.

There’s a large comics community here, whether it’s artists like Gerry Alanguilan and Leinil Yu, to annual conventions such as the Komikon. Do you participate in such forums and events?

I have great respect for these talented artists who have paved the way for struggling artists like myself. It would be awesome to be able to meet them in these events, however – for now, all the time I have is spent at work and raising the family, so no Komikon visits for me anytime soon.

How has the Internet and services like DeviantArt impacted your art?

Yes, indeed, I have benefited greatly from these art community sites. Not only has it made self promotion to a worldwide audience possible; it has also allowed me to connect with many talented artists whom I became friends with and gained lots of inspiration from.

What are the advantages and disadvantages of being an artist residing in the Philippines?

There are many advantages. The internet offered a lot of possibilities. There are more channels and opportunities for getting work abroad without having to leave the country. It’s so much easier to connect and share ideas online these days. One disadvantage I see is not being able to speak to them in person – which is something very minor.

For unfamiliar readers, where can we find more of your work?

Thanks! For those who are interested in seeing more of my works, you may visit my Deviantart gallery at http://www.s2ka.deviantart.com.

And my short comic strips at Murky Depths www.murkydepths.com/