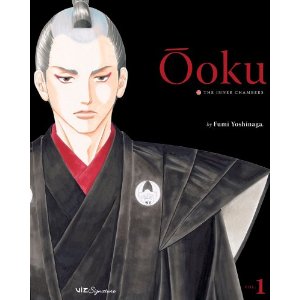 This year has two James Tiptree, Jr. Award Winners and one of them happens to be manga!

We chose Fumi Yoshinaga’s Ooku, Volumes 1 and 2 as our Tiptree winner with some trepidation. No one on the jury has read much manga; no one is an expert in Japanese history. What we fell in love with was the detailed exploration of the world of these books — an alternate feudal Japan in which a plague has killed 3/4s of Japan’s young men. In Ooku, the shogun and daimyo are women and much of the story takes place among the men in the Shogun’s harem.

The first volume (set in a later time period than the second) shows us a world in which men are assumed to be weak and sickly, yet women still use symbolic masculinity to maintain power. The second volume focuses on the period of transition. Through-out the two books, Yoshinaga explores the way the deep gendering of this society is both maintained and challenged by the alteration in ratios.

The result is a fascinating, subtle, and nuanced speculation with gender at its center.

Ooku is by Fumi Yoshinaga.