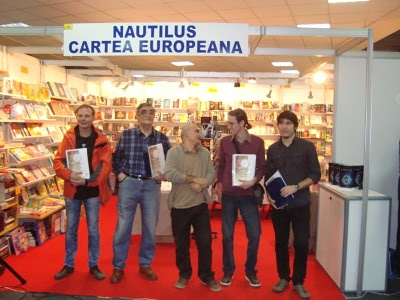 Friday, November the 19th 2010, at  the Gaudeamus International Book Fair (Bucharest, Romania), were awarded the SRSFF (Societatea Romana de Science Fiction si Fantasy) 2010 prizes.
These awards are meant to highlight the efforts of those who, during the year promoted and contributed to the romanian science fiction . 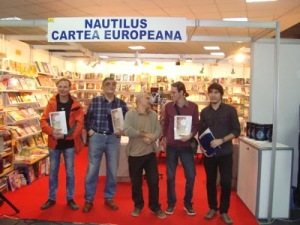 In SRSFF’s view, these awards represent the quality benchmarks of the romanian SF for the current year.
The jury was composed of Danut Ungureanu, Marian Truta, Feri Balin, Cristian Tamas and Sorin Camner.

One of the goals of the Romanian Society for Science Fiction and Fantasy is to recognize and support the values of the Romanian SF.
Therefore the SRSFF awards, by the end of each year, a series of awards to highlight and reward the efforts of those who have made significant contributions to the Romanian SF.
The first SRSFF Awards had been held on November 28, 2009 at Gaudeamus, the International Book Fair, in Bucharest, Romania.

Through these awards we want to cover as large an area of fandom activity. Therefore we will not only limit to the the awarding of literary productions. We are convinced that the SRSFF Awards are at the end of each year, a notable event for all fans of science fiction and fantasy in Romania.

The SRSFF Awards poster was created by the digital artist Alex Smith, whom we thank in particular. The design awards diplomas and trophies were made by Viorel Pîrligras, whom we thank very much.