I picked Tom Learmont up from Finchley Central tube station in North London and we made our way to a nearby pub for a conversation. Tom asked if this was my ‘local’ and I professed to not yet culturally assimilating into Britain, even after 13 years — the pub had been chosen purely for convenience’s sake — and was empty, bar a couple of people and a pile of discarded bottles! It must have seemed like a far-cry indeed from the reported vibrancy of his more familiar drinking space, the Radium Beer Hall in Johannesburg: http://www.theradium.co.za/

In good spirit though, Tom did not let the dullness of our surroundings phase him and we passed the time in lively conversation, while he nursed a pint of the local bitter. Tom spoke initially of the immediate inspiration for Light Across Time — he’d been gripped by Philip Jose Farmer’s book Tarzan Alive, which uses a biographical and scientific approach to transfer the legend of Tarzan into the realm of apparent credibility. Tom himself had a freewheeling range of ideas linking evolution and the geology of ‘weird events’ — such as strange lights and reported alien visitations — into a scientific narrative, providing the dramatic backdrop for a love story.

Woven into the narrative of Tom’s book Light Across Time are several detailed and seemingly first person accounts of historical locations — the first being Calais in the 1530s. I asked him how he had researched the accounts, as the level of close detail did indeed suggest first hand experience. He reported having bought a book concerning the ‘Lyell papers’, a first hand account of the times by Lord Lyell, for ten rand (less than a UK pound, little more than a US dollar) from Pick ‘n Pay (a South African super-market chain.)

Tom then went on to recount how the major scenes in the book had been written while on location, to try to ensure a more detailed sense of veracity, at such places as the Cradle of Humankind at Maropeng in South Africa. Some of the events were also based on ‘real’ experiences — Tom expressed some disdain for enforced novel writing blitzes inherent in such approaches as NaNoWriMo (National Novel Writing Month), as he is concerned these may end up with lots of words, but words somewhat decoupled from their underpinning experiences. 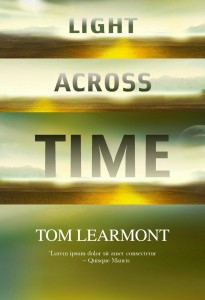 When asked about writing influences, Tom indicated Nabokov was a revered figure — so much so, that he was put beyond emulation — and a Nabokovian work forms a reference point in his book Light Across Time. Other listed SF/F influences are James Blish, Brian Aldiss, Theodore Sturgeon, Walter M. Miller and Barrington J. Bayley. More recent writers of influence cited were Adam Roberts, M. John Harrison, John Courtenay Grimwood, and Iain M. Banks. Echoing that last writer, there is a hint of Scottish brogue in Tom’s Southern African accent — a journalist by trade, he was educated in Zimbabwe (then Rhodesia) and Scotland.

Tom has written one earlier book — composed back during the days of Rhodesia’s Unilateral Declaration of Independence (UDI) from Britain, under Ian Smith’s white government — which is  entitled After the Eclipse. The book was published by Discobolus under Tom’s pseudonymous surname Rymour, perhaps an echo of one his literary personas, Thomas the Rhymer, whom he calls a ‘putative ancestor’. After the Eclipse won the Sanlam Literary Prize in South Africa in 1998 and is a satire, inverting not only race but behaviour and custom, in a ‘futuristic’ Zimbabwe/Rhodesia, as told through a ‘spirit medium’ — Tom himself described the book as an (African) ‘Swiftian cacotopia’.

He thought the book’s initial success promised a career launch into fiction writing and became somewhat disillusioned when this did not materialize, but realized he would need to persevere — and so he has, with the publication of Light Across Time by Kwela Books in South Africa this year (2011). The book has met with polarized responses — Tom interprets this as indicative it is on the ‘cutting edge.’ (One of his admirers is the South African novelist and poet Christopher Hope.)

When asked about African perspectives in science and speculative fiction, he said Africa has a rich tradition of the fantastic and he has no doubt more rich fantasy work — ‘whether you call it fantasy or magical realism’ — will emerge from Africa, to accompany such works as Lauren Beukes’s Zoo City.

Currently Tom is living and working in Johannesburg and has written a set of interconnected short stories with different voices, spanning time but linked in theme, which he is calling ‘Radium Tales’  — all of them resonating from his beloved Radium Beer Hall in Jozi/Joburg. (More details can be found on his website: http://tomlearmont.com/ )

When I dropped Tom back at the Finchley Central tube, against a dreary and early darkening sky, I thought of how much he probably longed for the warmth, colour and vibrancy of his own ‘local’. I wait to see what rich tales will emerge from what he calls ‘the navel of Africa’.